What Indie Jrpg Devs Can Learn From Persona 5, Part I 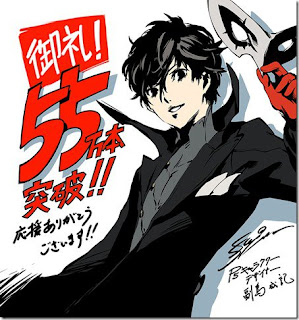 After years of laborious development and fans waiting, Persona 5 was finally released last september. And holy molly did it sell like crazy (over 550k shipped copies and counting). P5 went on to become the highest selling game in Atlus’ history. While we should factor in the cumulative popularity of the Persona franchise and the power of internet marketing (around the time Persona 4 was being marketed, YouTube was nowhere as big as it is today), the game wouldn’t have accomplished that feat if it wasn’t so damn exciting.

A huge part of Persona 5’s success comes down to how effective the various trailers were in building awareness and hype around it. In the first part of this series I want to discuss how aspiring indie devs who want to make JRPGs can learn from the case of Persona 5 in order to make games that are worth buying and playing.


If Persona 5 was simply about a cast of high schoolers bonding and fighting demons, it would’ve been an underwhelming rehash of Persona 3 and 4. The new entry had to distinguish itself from its predecessors and step up its game.

People lost their shit when they learned this was going to be about masked vigilantes confronting adults who can’t be trusted. No more are the playable characters just high schoolers, they are a wanted group who like to wear awesome costumes and must keep their activity secret. Even people who never played a Persona game before were interested.
Gameplay-wise, there’s a lot to be excited about: you fight the Shin Megami Tensei demons instead of the shadows from P3 and P4, the negotiation system is back with some tweaks, and you go through dungeons that are actually fun to play instead of the random mazes (the only thing I dislike about P4).

As somebody said on NeoGAF: “This is the best thing I never knew I wanted.”

Now consider the average indie RPGs. They recycle the usual settings and premises. Medieval era, green fields, villages with wooden houses, the MC with post-Nomura character design, some mystery girl, maybe a furry or two, pseudo-political strife, blah blah blah.
We’ve had enough of those. The crap we see on mobile devices makes me sick too. Dungeons are uninspired mazes with random encounters that chip away your patience. Excuse while I go look for something else.

Take a look at how Undertale does things. Watch the trailer for Cosmic Star Heroine and tell me what you feel. There is also Long Gone Days – which I’m going to buy as soon as it’s released. You don’t need the budget of a gaming powerhouse to come up with an original premise and well thought gameplay. The Jrpgs with distinct premises are those players will pay attention to. A modern-day dystopian setting where you play as a soldier gone rogue? Consider me hooked.

It doesn’t matter how well designed your trailer if your game is boring. If you’re going to set your RPG in a medieval context with castles and trolls, don’t bother – even if you offer awesome graphics.
I’m still waiting for an indie JRPG with playable mechas or space for a world map.
The point is: let your imagination run wild and brainstorm crazy ideas. Yes you have to make sure your concepts are actually feasible and don’t extend beyond your skills and budget. But don’t limit yourself to simply replicating what’s been done before. Some games are sold, played and remembered based on premises alone:


In business parlance this is called differentiation. If you’re not bringing something cool and unique, you’re doomed before you launch anything. And indie gaming is a tough business.

Persona 5 might be the most stylish game in recent memory. Creative and slick animations abound ; even simple things like transition screens and battle results got their share of polish. Every second of this game is feast for the eyes. 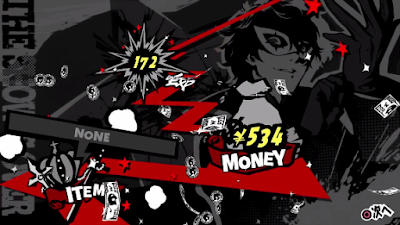 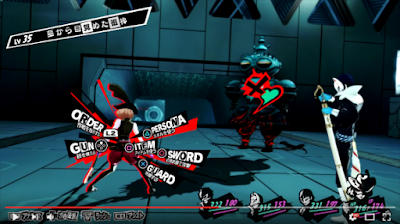 Now I know that this is a big company with God knows how many employees working non-stop for many years.
I’m not telling you to replicate Persona 5’s level of aesthetics. I’m simply telling you to take a moment and think of how you can make the game’s interface and menus visually appealing. A strong sense of aesthetics is one factor among many that will spread the word about your endeavor. You must use everything at your disposal to get noticed in the market.

Give your game its own visual identity. Pick a palette of colors and stick to it (Persona 5 has red and black), choose specific motifs (esoteric symbols, or mundane objects) and decide on what kind of tone you want (goofy? classy? grim?). Think of the players’ poor eyes and spare your text font from looking like a pixelated mess. Give your menu boxes a few unorthodox angles, all without compromising functionality. Do it however you like, but pimp your game.

And yes, people can still enjoy your game with regular menus, it’s not going to succeed or fail based on that, but going the extra mile helps in standing out in a crowded market.

While you’re at it, go to the depths of hell if you have to but bring sprites and backgrounds that are pleasant to look at. Players will be staring at your work for hours so you better reward their investment with a product that doesn’t hurt the eyes.

Look at Long Gone Days and how it uses green in menus, sniping battles, character design and backgrounds to emphasize the military tone. The icons that come with gameplay notices and the radar chart for characters are a nice touch. This kind of details adds up and makes for a memorable experience. Moreover the realistic proportions of characters sprites make sure you don’t confuse this game with any other. Whether it’s the art direction or the premise, I’m sold through and through. 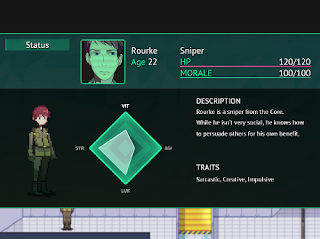 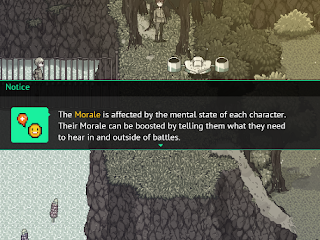 We have now established the important of having a compelling premise elevated by polished presentation. In the next part we'll discuss character design, music, trailers and more. Stay tuned!
Publié par Khalid à 12:03 Aucun commentaire: